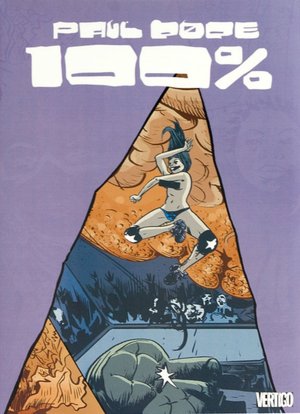 Title: 100%.
Author: Paul Pope.
Genre: Fiction, graphic novel, science fiction, cyberpunk, futuristic fiction, dystopian fiction, romance.
Country: U.S.
Language: English.
Publication Date: 2002-2003 (2005 compiled).
Summary: The setting is urban maze of 2038 Manhattan, where sex obsession and the lengths society goes to satisfy has become extreme. Pope follows six principal characters, all of whom know each other in some fashion, and who are linked through the strip club that’s at the center of the book. Strel manages the dancers. Strel’s ex, Haitous, is a fighter who returns to New York after a year away, trying to get back together with Strel and their son. Strel wants nothing to do with Haitous, but he wants her back so badly that he’s willing to give up fighting – after one more fight that promises a big payout. Strel’s cousin, Eloy, wants funding for an art project he’s working on. Kim tends bar and ends up taking a great deal of interest in Eloy, who struggles with the age-old conflict between having artistic integrity and compromising a bit in order to get some money to continue. John, a busboy at the club, meets Daisy, a new dancer, and is instantly smitten with her. Daisy has no interest in getting involved with John, but he eventually breaks down her barriers and the two have a torrid affair. 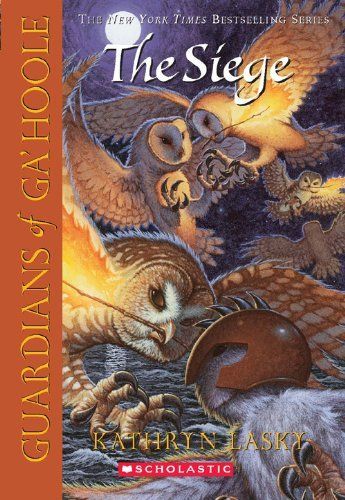 Title: Guardians of Ga'Hoole: The Siege.
Author: Kathryn Lasky.
Genre: Fiction, YA, children's lit, animals, adventure.
Country: U.S.
Language: English.
Publication Date: 2004.
Summary: Soren's beloved mentor, Ezylryb, is finally back at the Great Ga'Hoole Tree. But all is not well. There's a war between good and evil in the owl kingdom. On one side is a group led by Soren's fearsome brother, Kludd, who wears a terrifying metal mask to cover his battle-scarred face. On the other side are the owls of the Great Ga'Hoole Tree, who must fight to protect their legendary tree from Kludd's attacks. 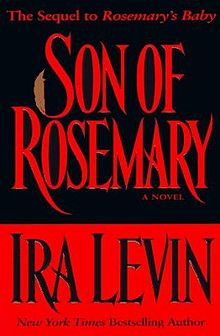 Title: Son of Rosemary.
Author: Ira Levin.
Genre: Fiction, horror, fantasy.
Country: U.S.
Language: English.
Publication Date: 1997.
Summary: Thirty-three years ago, Rosemary gave birth to the Devil's child while under the control of a satanic cult of witches. Now the year is 1999, and humanity dreads the approaching twenty-first century, desperately in search of a savior for this troubled world. in New York City, rosemary's son Andy is believed to be that savior. But is he the force of good his followers accept him to be? Or is he his father's son? Rosemary and Andy will be reunited in a battle of wills that shall decide the fate of humanity. 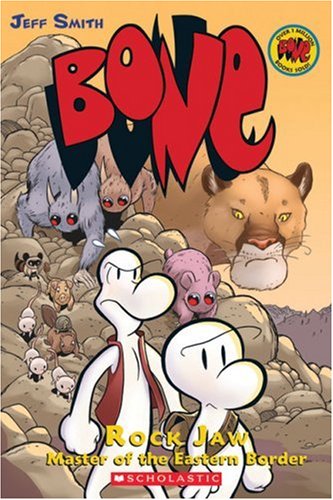 Title: Bone: Rock Jaw, Master of the Eastern Border.
Author: Jeff Smith.
Genre: Fiction, graphic novel, fantasy, adventure, children's lit, YA.
Country: U.S.
Language: English.
Publication Date: September 1, 1998.
Summary: Fone and Smiley Bone strike out into the wilderness to return a lost rat creature cub to the mountains. It doesn't take long before they run smack into Rock Jaw, "Master of the Eastern Border," an enormous mountain lion with a none-too-friendly disposition. Life gets even more complicated when they befriend a group of baby animals who are being orphaned by rat creature attacks. Everything comes to a head in an earth-shattering clash between Rock Jaw and Kingdok, the leader of the rat creatures. 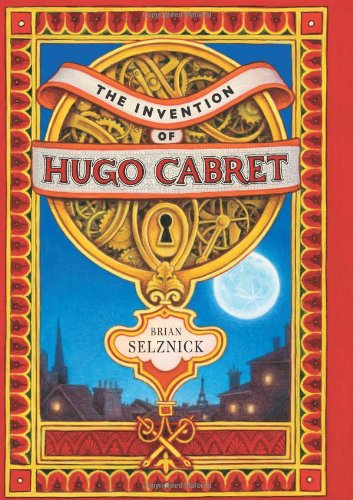 Title: The Invention of Hugo Cabret.
Author: Brian Selznick.
Genre: Fiction, picture books, YA, teen, historical fiction,
Country: U.S.
Language: English.
Publication Date: January 30, 2007.
Summary: 1931. Orphan, clock keeper, and thief, Hugo lives in the walls of a busy Paris train station, where his survival depends on secrets and anonymity. But when his world suddenly interlocks with an eccentric, bookish girl and a bitter old man who runs a toy booth in the station, Hugo's undercover life, and his most precious secret, are put in jeopardy. A cryptic drawing, a treasured notebook, a stolen key, a mechanical man, and a hidden message from Hugo's dead father form the backbone of this intricate, tender, and spellbinding mystery. The book's primary inspiration is the true story of turn-of-the-century French pioneer filmmaker Georges Méliès, his surviving films, and his collection of mechanical, wind-up figures called Automata. 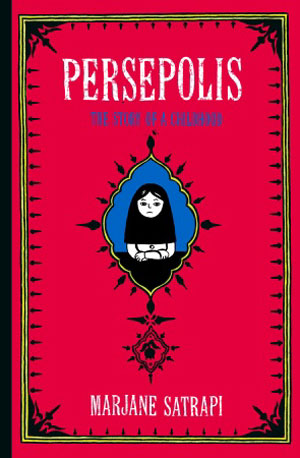 Title: Persepolis: The Story of a Childhood.
Author: Marjane Satrapi.
Genre: Non-fiction, graphic novel, memoir, war lit, Iran-Iraq war, Islamic revolution.
Country: France.
Language: French.
Publication Date: 2000-2003 serialized (2003 in English).
Summary: Marjane Satrapi’s memoir of growing up in Iran during the Islamic Revolution. Satrapi tells the story of her life in Tehran from ages six to fourteen, years that saw the overthrow of the Shah’s regime, the triumph of the Islamic Revolution, and the devastating effects of war with Iraq. Marjane’s child’s-eye view of dethroned emperors, state-sanctioned whippings, and heroes of the revolution allows us to learn as she does the history of this fascinating country and of her own extraordinary family. The intelligent and outspoken only child of committed Marxists and the great-granddaughter of one of Iran’s last emperors, Marjane bears witness to a childhood uniquely entwined with the history of her country. Title: Persepolis 2: The Story of a Return.
Author: Marjane Satrapi.
Genre: Non-fiction, graphic novel, memoir, politics, romance, religion, political dissent, feminism.
Country: France.
Language: French.
Publication Date: 2000-2003 serialized (2004 in English).
Summary: In 1984, Marjane flees fundamentalism and the war with Iraq to begin a new life in Vienna. Once there, she faces the trials of adolescence far from her friends and family, and while she soon carves out a place for herself among a group of fellow outsiders, she continues to struggle for a sense of belonging. Finding that she misses her home more than she can stand, Marjane returns to Iran after graduation. Her difficult homecoming forces her to confront the changes both she and her country have undergone in her absence and her shame at what she perceives as her failure in Austria. Marjane allows her past to weigh heavily on her until she finds some like-minded friends, falls in love, and begins studying art at a university. However, the repression and state-sanctioned chauvinism eventually lead her to question whether she can have a future in Iran.